Walking towards the prestigious Regents College I felt the anticipation of excitement, creativity and impending inspiration. The objective of the weekend was to be inspired again, but with the packed timetable and variety of sessions and speakers I wasn’t quite sure what form that would come in.

Once I got my festival accreditation I made my way into Tuke Hall where it was standing room only. However, I spied a vacant aisle seat midway down and parked my suitcase, my iPad and my grinning face down. After an excitable opening speech by festival director Chris Jones, we were on our way to our first session.

The Creative Screenwriter which combined a taught session and a book launch was my first encounter. Led by Zara Waldeback and Craig Batty, they combined both the theory behind the craft of screenwriting with techniques to improve creativity. These were very simple techniques which as a writer you do forget, and in my case get very lazy with the written language. They reminded us as writers that we need to train the craft, establish a creative practice and write regularly. I also came away with notes on not settling for my first idea, thinking about the verbs I use in my scripts and general day to day writing. We also discussed plotting, working with worlds, scene writing and using valuable objects. There was a lot to get through in the dedicated time given that their book was a decent length.

I had never been to a book launch before so was new to how it worked. I did end up counting how many times they managed to plug ‘The Creative Screenwriter’. It was a book launch after all so I shouldn’t really have been put off by that, in the end I decided to purchase a copy and even got it signed by both of them. They were both passionate about their topic so spending a tender on a book was a worthwhile purchase for me – even though I swore earlier this year that I would only buy kindle books due to my house being turned into one giant bookcase.

The next session was by Peter Thornton – the creative head of comedy called “How can you play a part in British Comedy”. Again some good tips were given to the delegates.

By this time of the day though I was starting to feel the effect of getting up at 5am after only three hours sleep. Strong coffee and a break were definitely needed. Sitting in that session I made the conscious choice that next year I would suck up the extra nights accommodation cost and stay in London the night before. 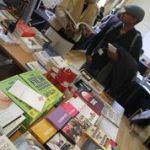 There is plenty of networking opportunities to do in the breaks. I also wandered around the book stall, Writers Guild table and was constantly checking the LSF app which was so informative over the weekend.

The next session brought me fully awake due to the enthusiasm of the speaker and the content of the discussion which was Julie Gray’s “You are the HERO of the journey”.

Wow – I think the way that Julie projects her voice, her knowledge and her enthusiasm she could make the dullest topics seem excitable. If I was lagging in the tired stakes at this point of the day she brought me back to life like a shot of expresso! This was a pivotal moment for me in terms of my masters studies too. I have read lots of the theory books, listened to various lectures but for some reason Julie made it all click for me – at last I understood how important it is to take the protagonist on a certain pathway with my writing. Yes…that’s why X did this in that film, that is why Y was there when X did this… it was all making sense now. Sitting in Tuke Hall I felt like I was Jake Blues when he is in the church and he receives a “message from God” to put the band back together. I understood what I need to do with my characters from now on. It’s not about liking them at the start of my story, its about making sure they are flawed, with an inner need etc etc.

Key aspects I have taken from this session.

Okay now two things happened! The first thing is I started to think about the scripts that I have written so far, and how I hadn’t developed my characters as fully as I should. I didn’t know them inside out and as a result my storyline was weak. Okay, no worries as that is what re-writing is for.

The second thing is something that my poor husband is going to moan like hell about. I am going to be super-critical every single time I watch a TV show or a film with him as I will be looking for those elements that should be happening. If it was bad enough with my limited knowledge of the craft of scriptwriting (in that I have now either turned a film off or left the room as I cannot face spending time watching stories where I don’t care about the character, therefore the writing is weak) – well it’s about to become even more of a problem.

So, Julie gave me creative high during that session. I then went into the “Writing for Young Audiences” session with Rob Spackling, Chris Hill, Tim Bain and Tony Cooke.  I quickly realised I hadn’t read the brief fully and this wasn’t the session for me. My stamina was shot for the day and I had to retreat back to my hotel which was a tube ride away. Sleep was important as Julie Gray was scheduled for a 9am class on the Saturday and I thought if anyone is worth getting up early for – it is definitely that woman! I think I may have developed a little student crush on her, she is a teaching gem!

One thought on “Day 1 of the London Screenwriters Festival”

[…] after the contest ended, I was lucky enough to meet Julie in London while she was speaking at the London Screenwriter’s Festival, hosted by Chris Jones. She has a type of energy that envelopes you instantly, and the warmth and […]

COOKING ON A BOOTSTRAP

by Jack Monroe, bestselling author of 'A Girl Called Jack'