I have exciting news.

My fantastic, funereal farce Bleeding with Mother is part of this years Greater Manchester Fringe Festival. 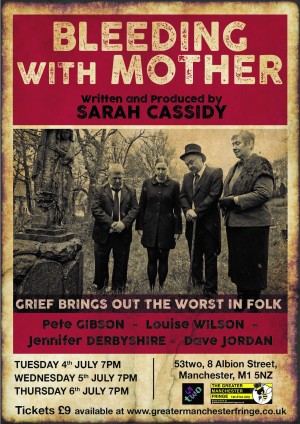 We open on the 4th July at 7pm at Theatre 53Two. The hottest new theatre space in the city of Manchester, and the perfect location to resurrect ‘Mother’

Following on from the success of the previous production last year, I am delighted to have obtained the original cast.

Excitingly, director Emma Bird is a welcome recruit to the Bleeding team fresh from directing our very own Randall (Pete Gibson) in his monologue performed in North West Wonders.

Rehearsals began this weekend so please come back to my website as I’ll ensure that I keep you up to date. This year I have the added pressure of producer so if it all goes wrong……well that’ll be the plot for the next play that I write.

It would be wonderful to see as many people as possible for our Bleeding fantastic show.

Performances are on Tuesday 4th July, Wednesday 5th July and Thursday 6th July at 7pm. To buy them click here.

There will also be limited copies of the playtext available to purchase on the night.

This entry was posted in Bleeding with Mother, Plays, Writing. 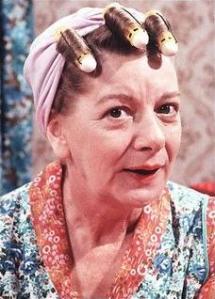 26.65 million viewers tuned in to watch Coronation Street on Christmas Day in 1987 as Hilda Ogden walked down the cobbles for the final time as she bid farewell to Weatherfield.

That’s 26.65 million people all seated around their television watching that final scene together. That shows the power of television back in the 1980s.

Those ratings are a thing of the past nowadays given the amount of choice that we now have, but still incredible to think of viewers in that scale.

Recently I attended a Coronation Street event to celebrate 60 years of Granada which was held at HOME in Manchester. I love Coronation Street and all that it encompasses.
In attendance were Sally Dyvenor (Sally Metcalfe but she’ll always be Sally Webster to me), Connor McIntyre (Pat Phelan, arguably the best soap villain since Richard Hillman and Jez Quigly), writers Debbie Oates and John Stevenson, Exec Producer Kieron Roberts and voice of Granada Charles Foster.

What followed was a truly, indulgent Corrie fest featuring TV clips from the past, voiced by the people who create the show.

I wasn’t prepared for how emotional I became watching some of those clips as they transported back to the era in my life when those characters played a central function to me. I watched Annie Walker and Bet Lynch heading up the Rovers through my young eyes, then into my late teens as Bet Lynch became Bet Gilroy and her side-kick was Alec ‘Tiger’ Gilroy. 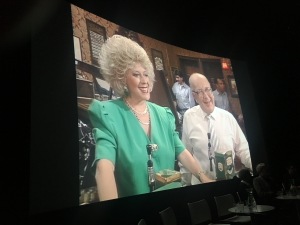 Then onto all grown-up and responsible me as the audience were treated to a preview of Nick Tilsley and Peter Barlow fighting on the street in the 2016 Christmas Day special. It resembled the scene in Bridget Jones’ Diary when Hugh Grant and Colin Firth collided in fisticuffs in a middle-class British bust up, but instead of snow there were cobbles and gnomes.

For me, watching Hilda and Stan frantically searching a land-fill site for abandoned underwear with the hilarious Eddie Yeates was a delight for a die-hard Corrie fan such as myself. I sat in silence as I lapped up this nostalgic evening and realising how much this television soap has become such a big part of my life.

The first times that I was affected emotionally through television and characters were through Starsky and Hutch and Coronation Street.

I can recall feeling desperately anxious that Hutch was going to die from the plague in an old two-part episode in the 70s which I think was titled ‘Plague’. It caused no end of stress for my sister and I who loved the character of Hutch, so we were all behind Starsky as he began his race against time to save his partner. We were there every second of the way with him as he bravely fought the ‘baddies’ to find a cure. The relief those two little girls felt when Hutch finally awoke from his coma was huge.

Secondly, I can vividly recall watching the Ken, Deirdre and Mike love triangle unfold and feeling such anger towards Deirdre for cheating on Ken with Mike Baldwin. How dare she do that to Ken! So when Mike turned up on her doorstep I was right behind Ken Barlow and secretly praying that Deirdre would come to her senses and quickly.

And so at six years old began my love of television and characters who invoke emotion in me that continue to this day.

Coronation Street and their larger than life characters have been with me throughout school, college, becoming a young parent, through loneliness, depression, career building and now into my forties. It is a comforting friend who is always there no matter where I am in my own journey.

I’ve fallen in and out of love with the characters and can relate to it’s stories, humour, northern-ness and now I work across the water from where it is made. I often see Nick Tilsley going for his run in the morning as I walk to work, have ordered a pint next to Tyrone and queued up for the toilet behind Carla.

I thank Granada for delighting me with this trip down memory lane, a remarkable evening celebrating the past and the future of the street. I think my love for Weatherfield will continue past retirement and into my twilight years. 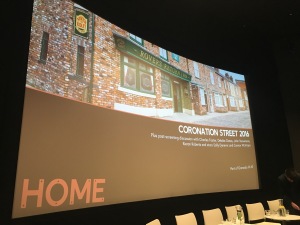 It might never reach 26.65 million viewers again, but it definitely has its die-hard fans who’ll stick with it through their own milestones in life. 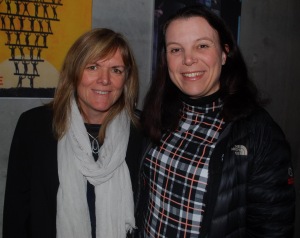 by Pete Gibson who plays Randall Nolan in BLEEDING WITH MOTHER.

Everyone from Carrie Fisher to Sigourney Weaver and William Shatner has reprised a role.

In the case of Captain Kirk there was a ten year gap between his first appearance on the Star Trek television series and his starring role in the franchise’s first feature film. The magic was still there but then so was the melodrama (sorry Bill, I prefer Walter Koenig).

Why would an actor return to a character? We’re an itchy footed transient lot after all, always looking for a fresh challenge.

Unfinished business may be one reason. That was certainly the case for Sigourney who ratcheted-up Ripley from one of the gang to the central iconic character in the Aliens series. I reckon she also wanted to see what she looked like with a Servalan type skinhead (wonder if it made her want to moon stomp?)

When returning to the same script, there is also the rare luxury of getting another go at a character, enhancing it, finding something new in it. Though be warned, even a small gap between productions renders the older mind incapable of recalling lines at an instant!

So here I am facing the prospect of playing Randall Nolan again in Sarah Cassidy’s “Bleeding with Mother” and doing the hard yards with the script in anticipation of performing it again at the King’s Arms Salford (Saturday 10th September).

I am determined to find more in this my third shot at the role (I rehearse read it a couple of years of the role). Polish, improvement and something new is what I am aiming at. But there is another good reason for my reprising Randall:
I just want to.

Bleeding with Mother is a very contemporary play about modern life. But it also transcends time in its themes of death, greed and relationships – issues since the birth of humankind. It also has an old fashioned sense of character, stagecraft and plot. Farcical and comic yes, yet structured and telling a STORY – qualities that are missing from so many plays of today.

This is a play that deserves to be seen again. And in the case of Randall, a lost and bullied soul, displaced and out-of-step with modern life, the subject of working class men’s mental health bears another examination.

They say never go back. But hey, faced with a character on the cusp of an emotional crisis but still able to laugh about farting corpses and nosey neighbours was just too good an opportunity to miss.
See you in Salford.

Bleeding with Mother is staged at the King’s Arms Theatre Salford on Saturday September 10th – doors open 7pm. Tickets are available from http://www.wegottickets.com/event/366987

The play text is also available via this link on Amazon.

Bleeding with Mother will be produced by the newly formed M62 Productions.

This entry was posted in Bleeding with Mother and tagged Fringe, Manchester, theatre, writing.

Clayton Green library was like a second home to me when I was a teenager. The library staff knew me by name as I would be there every single day in the long summer holidays.

I could be found sitting in the corner reading books as my library card only allowed me to take four library books away. I could read four library books in a couple of hours back then. I am talking Sweet Valley High’s Wakefield sisters rather than the Bronte Sisters, so the books were thin rather than War and Peace volume.

I enjoyed being in a fictional world with characters that I would never come across on a Saturday afternoon in Preston.

I also loved to write my own stories using those fictional characters that I read about.

Secretly, I longed to see my name on the front of a book cover like all of those famous authors whose work I enjoyed. I would wonder whether Francine Pascal or Jackie Collins would get excited about seeing their words in print for the public to see. I bet they did.

So I’m delighted to say that tomorrow afternoon I will be spending an hour taking part in a book launch for Write for the Stage Publications (WFTS) and my first play Bleeding with Mother is on sale.

I still can’t quite believe it. A play written by me, in print, with my name on the front cover. If I never do anything again, at least on my bookshelf which is stacked with printed copies of stageplays and screenwriting bibles; Willie Russell, Lena Dunham, Blake Snyder and Robert McKee is now a Sarah Cassidy. Does that mean I can say that I’m a proper writer now? 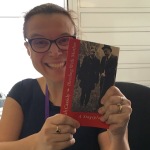 The Write for the Stage Publications launch event is part of Greater Manchester Fringe Festival and is taking place at 4pm at The Kings Arms, Bloom Street, Salford, M3 6AN 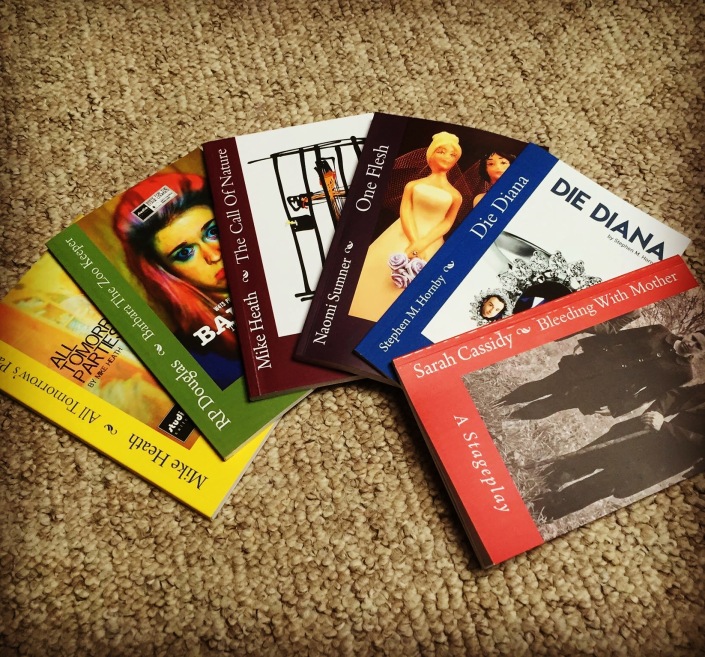 “Bleeding with Mother” A Black Comedy 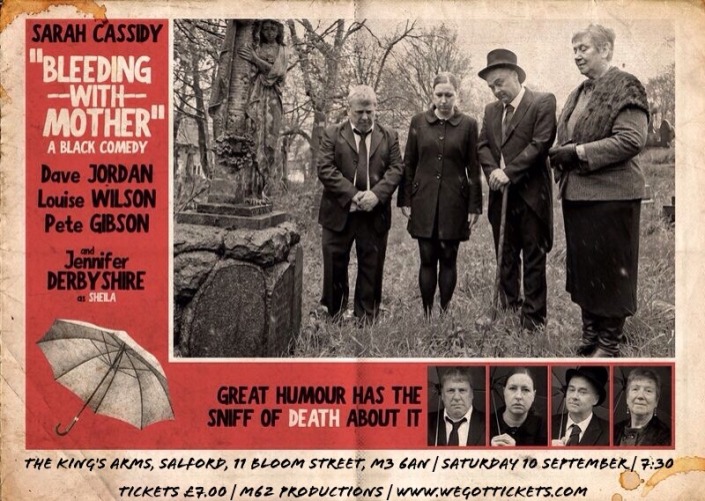 My debut stageplay Bleeding with Mother will be laid to rest in May 2016.

Staged in my hometown of Manchester, Bleeding with Mother is an opus kitchen sink drama meets farce as in true Catholic tradition, Sally-Ann Nolan’s coffin is laid out in her home the night before her funeral. There follows a séance, IVF troubles, a hidden fortune, interfering neighbours and some missing Russian dolls.

Tickets are on sale from 5064 Productions and priced at £6 or £5, cheaper than a pint of lager and a packet of crisps (well in town centre ale houses any road).

We’ll be playing at three locations across Manchester, but we’d really love it if folk would come to either the Joshua Brooks or Nexus Art Cafe nights as they’ll be a reet good laugh.

So come and bid ‘Big Sal’ a fond farewell as we join Randall, Carol, Sicknote Sheila and Doug as they bid her a final farewell, and remember that GREAT HUMOUR HAS THE SNIFF OF DEATH ABOUT IT……

This entry was posted in Uncategorized.